Ronald Markman (May 29, 1931 – May 30, 2017) was an American artist and educator best known for producing large colorful paintings and sculptures in an individual style that combined elements of Surrealism and Pop Art with a deep grounding in color theory. He integrated classical and popular culture, humor, whimsy and riotous color to deliver social satire and a deeply personal vision of the world.

Markman was born in the Bronx, NY during the middle of the Great Depression.  As a child, Markman read Krazy Kat and Smokey Stover comics, attended Broadway shows with his family, and listened to Jack Benny, Fred Allen, and Edgar Bergen on the radio while doodling or drawing at his kitchen table. He aspired to be a professional cartoonist and, as a teenager, sold cartoons to Seventeen and Redbook magazines.  While still in high school, he sought out and received advice from The New Yorker cartoonist Saul Steinberg who served as an early role model.  After reviewing Markman’s portfolio, Steinberg encouraged him to pursue cartooning and suggested he hone his skills with formal art training.  Markman enrolled in the Art Students League, where he studied with Georg Grosz, and subsequently at Cooper Union.  According to Markman, other early influences included Paul Klee, Marc Chagall, Joan Miró, Alexander Calder, and Claes Oldenburg.

In 1952, Markman was drafted into the Army during the Korean War, where his talents were directed toward utilitarian tasks. “I painted signs. What else could they do with a painter? I was very lucky,” says Markman.  Two years later, after completing his service and earning the rank of sergeant, he enrolled at the Yale University School of Art on the GI Bill.  Notable friends and classmates during Markman’s tenure at Yale included Eva Hesse, Joseph Raffael and William Bailey, as well as the painter-turned-poet Mark Strand.

At Yale Markman studied under the tutelage of Josef Albers, a visionary geometric abstractionist considered the father of color theory and best known for his signature series “Homage to the Square.” Markman earned his BFA in 1957 and his MFA in 1959, studying color, drawing, and painting.  Josef Albers’ instruction strongly influenced Markman’s work throughout his lifetime.  “I feel I owe Albers everything,” said Markman “He taught me that you need to learn about yourself and figure out how to translate your self-knowledge into art. You don’t want to be like everyone else. You want to figure out what makes your art special and different in a meaningful and imaginative way.” 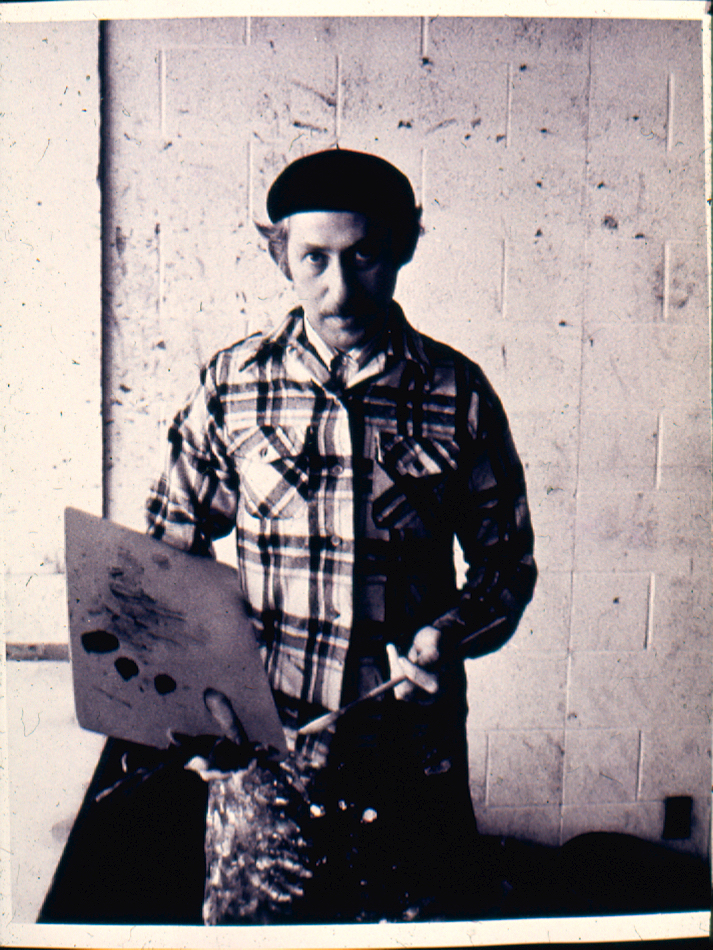 Markman’s early work reflects the influences of Albers’ philosophy of color theory, Georg Grosz’s biting social satire, Markman’s fascination with popular culture and his uniquely personal perspective on the state of the world.  Markman was dismayed by the emergence, in the second half of the 20th century, of an increasingly commercialized and coarsened consumer culture that valued money, convenience and sex over classical humanist values. His aesthestic was rooted firmly in his classical art training and was influenced by both popular culture and primitive artists.  His drawings and paintings—which combined a mix of farce, pop-art and narrative imagery to deliver a humorous take on society—gained early recognition at a national level.

Markman’s first one-man exhibition at the Kanegis Gallery in Boston in 1959 was a critical and commercial success. That same year, three of his drawings were acquired and exhibited in a Museum of Modern Art’s (NYC) “Recent Acquisitions” show.  The next year (1960), his work was exhibited in the Whitney Annual and the Whitney “Young America” group exhibitions.  His drawings were included in a group exhibition entitled “Drawings of the Twentieth Century” at the Arts Club of Chicago in 1962, and in the “Chicago Biennial Print and Drawing Show” at the Art Institute of Chicago in 1964.  In 1965, Time Magazine wrote of his work “The influence of such early heroes as Steinberg, Searle and the late George Grosz accounts, in part at least, for Markman’s abundant satire and spare surrealism. But he seems to be something of a seer too.”  And in 1965], John Gruen of the N.Y. Herald Tribune wrote “A bit of Steinberg, a dash of Klee, and a soupcon of the English cartoonist Searle—and, voila—Markman… there are skill, humor, and delight to be found in these paintings and drawings.”

Simultaneously, Markman laid the foundation for an influential academic career.  In 1959 and 1960, Josef Albers arranged teaching positions for Markman at the University of Florida in Gainesville and the Art Institute of Kansas City.  In 1960, Markman was offered a position at the Art Institute of Chicago where he would teach painting until 1965.  Some of his students, including Jim Nutt, went on to form the Chicago Imagists movement and the Hairy Who.  Harold Haydon of the Chicago Sun Times and Alan Artner of the Chicago Tribune both identified Markman as a strong influence on this movement, christening him “the long-neglected father of Chicago Imagist painting.”

A turning point in Markman’s art came in 1962, when a  Fulbright award took him to Rome, where his fascination with antique Italian maps inspired his creation of an imaginary, satirical country of his own. “The map had to have a name, so I came up with Mukfa,” recounted Markman. “I wanted something slightly obscene, because the world is obscene, as you probably know.” He described Mukfa as a “fantasy realm of unbridled absurdity” where his alter ego, Rolland Markum, and a cast of colorful characters existed uncensored in an exaggerated alternative reality. Mukfa, with its slyly bawdy name and iconic cast of cartoonish characters, became a recurring leitmotif throughout his career and a versatile vehicle for Markman’s humorous social commentary.

In 1965, Markman joined the Terry Dintenfass Galley in New York City.  Dintenfass, a prominent New York City gallery owner, had built a reputation as a dealer of iconic artists outside of the mainstream including Jacob Lawrence, Horace Pippin, Ben Shawn, Charles Gwathmey, Richard Merkin, Arthur Dove, and many others.. In reviewing Markman’s first Dintenfass show in November 1965, John Canady of the New York Times wrote “Paul Klee seems to have been crossed with Mad magazine in these extremely detailed and often hilarious fantasies. The paintings are big and bright; a series of etchings are worth very close attention… everywhere the hilarity has an undertone of ‘Better laugh while the laughing’s good’.”

Three years later, reviewing another one-man exhibit, Arts Magazine wrote “Markman’s art reveals a working mind, a keen sense of humor, a talent capable of creative flexibility in both painting and sculpture. Creation is a game and he enjoys playing with ideas, words, and reactions; a thinking artist, he comes across with a child-wild imagination, unlimited in its fantasy, inventiveness, and vision. Markman creates his own language of art, a newspeak dictionary of words, a new species of people and a completely different environment which makes up his kind of world…. On this fantastic voyage we see his unlimited imagination and creativity at work.”  The Dintenfass Gallery, with its mix of outsider and classically trained artists, as well as those with a strong illustrational bent, was a good fit for Markman and he exhibited at the Gallery repeatedly over the next two decades.

As his work evolved, Markman continued to explore the tension between “High Art” and popular art and the polarity between these two modes of visual expression.  In concert with many of the emerging Pop artists of his era, Markman was intrigued by the impact of advertising and commercialism on cultural identity and expression. Like Andy Warhol, Ray Lichtenstein and Claes Oldenburg, he challenged the traditional conventions of classical fine art and referenced popular culture and every day products.  Markman borrowed from cartoon constructs and integrated found objects (such as buttons, paper flowers, and plastic fruit) into his art. Whereas other Pop artists brought a coolness and detachment to their work, Markman deployed riotous color, humor and pun-filled word play to engage and invite interaction from the viewer. He drew from social situations and popular culture icons to construct his own universe in which viewers saw themselves and society reflected in a truthful, but light-hearted way.

Stylistically and conceptually, Markman’s work is also often compared to that of Red Grooms.  Markman is also recognized as a teacher and “father” of the Chicago Imagist and Hairy Who movement – a group of artists who lampooned society and made political commentary – in cartoon fashion.

From the mid-1960’s through the early 1980’s, Markman created a Mukfa installation comprised of more than 75 sculptural paintings. In his island country of Mukfa, Markman fashioned a sophisticated society of obvious foils and the pressing expediency of getting through life with its daily annoyances as depicted through “go-go-go,” or honking taxi cabs on bridges and intersections, and general sensory overload expressed through complex patterns, exciting colors and exclamatory speech clouds. His Mukfa narratives and imagery included tongue-in-cheek literary references, sexual innuendoes and bawdiness, double entendres, and wordplay that were poignant and funny, but never judgmental or clichéd.

Markman was highly prolific, creating both large and small-scale paintings in addition to the paintings set in his world of Mukfa.  He worked in multiple media – including etchings, bronze sculptures and color-pencil drawings.  In 1969, the Museum of Modern Art commissioned him to create three holiday cards.  In typical style, Markman poked fun at a conventional winter wonderland theme by drawing a camel in a parched desert, dreaming of snowmen.

In his later years Markman moved away from canvas.  His mature work became increasingly sculptural, combining painting and sculpture and a variety of found and everyday objects.  As his work matured, Markman increasingly sought a more naïve aesthetic. Markman moved away from the limits imposed by the rectangular dimensions of canvas by painting on small pieces of masonite; these segments were then joined into a sequence that allowed a larger painting to develop into a synthetic whole, and to assume unusual and even three-dimensional shapes in its final form. This gave his images, with their rough edges and their quirky, cockeyed forms, the freshness and directness characteristic of self-taught, outsider or outlier artists. In reviewing this evolution, The Soho Weekly News wrote (March 1979) ”Ronald Markman used to paint on flat surfaces, like other painters. Recently he turned to creating painted wooden assemblages, and in so doing has produced some of the most enjoyable works on view this month.”

Markman’s vibrant, colorful constructions are intricately detailed, teeming with word play and populated by cartoon-like characters. Although his work appears spontaneous and randomly silly, Markman deliberately planned each detail, down to the smallest brushstroke.  Grace Glueck of The New York Times wrote about Markman’s work in January 20, 1984. “Ronald Markman’s sprightly domestic scenes, wall pieces built up of painted wood cutouts, show he’s paid close attention to comic strips, and also to the early works of Picasso and Braque. In lesser hands, this combination might not work, but—wildly mixing colors, scales, textures, dimensions, perspectives, illusion and reality—he brings it off with verve.”

Markman was a highly disciplined worker, painting or drawing every day that he was not teaching.  The preponderance of his teaching career was spent at Indiana University, Bloomington.  In 1965, Markman was offered a faculty position which he held until his retirement in 1994.  Shortly thereafter, he moved to Annapolis, Maryland where he lived and worked until his death.  St. Johns College mounted two retrospectives of his work – in 2005 and in 2017 – as did the Maryland Hall.

Markman married Barbara Miller in 1959. Their daughter, Ericka, was born in 1961.  Barbara Markman died in 1991.  Several years later, Markman met Barbara Cabot, who moved with him to Annapolis, where they lived together until his death in 2017.